To share your memory on the wall of Frank Elliott, sign in using one of the following options:

In addition to his wife Barbara of over 60 years, Frank is survived by son Richard (Teresa) Elliott of Hamilton; daughters Lori (Al) Verbeke of Heath, Texas and Cheryl Elliott of Holland; grandchildren Branden Otting of Hamilton, Alex and Adam Verbeke of Heath, Texas, and Gloria Swai Elliott of Arusha, Tanzania, Africa; sisters Juanita Johnson of Grand Haven and Ovella Stephens of Holland, along with many nieces and nephews.

To send flowers to the family or plant a tree in memory of Frank Roy Elliott, please visit our Heartfelt Sympathies Store.

Receive notifications about information and event scheduling for Frank

We encourage you to share your most beloved memories of Frank here, so that the family and other loved ones can always see it. You can upload cherished photographs, or share your favorite stories, and can even comment on those shared by others.

Today my heart is heavy with sadness for the passing of a Great man. Frank was a kind neighbor who was always looking out for others. He worked hard every day and always had joy in his heart. This is something I learned first hand as the tag along neighbor kid. We moved across the street from the Elliott family in the early seventies. It did not take long to feel welcome at their home! Hospitality and laughter was always guaranteed. So many memories of dinners around their table, horseback riding, camping and mini adventures to Lake Michigan and Hutchins Lake. Frank would include us if he was working on projects in his garage which might be wood working or small engine repair. He encouraged our learning by letting us observe. Once chores were completed he was ready to enjoy a game of cards or his favorite television show. Those who knew Frank understood he loved Jeopardy! This was not just a TV show it was a ritual in the Elliott home. Frank would know the answers prior to the contestants response. If you knew Frank he was always cheerful but his competitive side came out on Thursday nights for bowling at Lakeview Lanes in Douglas. Frank was a great Dad and a wonderful example for his kids. Something else I remember is Frank and Barb would work on a crossword puzzle every night. Many times holding hands as they worked to solve the daily puzzle. Sometimes there was a debate about which word should be used but Frank would take Barb's advice. You could always see their love!

Posted Jan 29, 2020 at 11:31am
Barb and Family, I'm so sorry to hear of Franks passing. The best part is you know he is with the his Lord and Savior.
Comment Share
Share via:
SS

Posted Jan 29, 2020 at 10:55am
May you celebrate Frank's great life with memories of much joy and laughter. My deepest sympathies to you Barb, Lori, Cheryl, Rich and your families.

Flowers were purchased for the family of Frank Elliott. Send Flowers 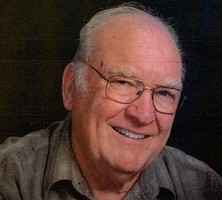