To share your memory on the wall of August Knikelbine, sign in using one of the following options:

A celebration of life for Gus and Pat will be held at the Community Church of Douglas from 1:00 pm until 4:00 PM on Saturday, September 28, 2019, which would have been their 62nd wedding anniversary.

A private graveside service will be held at a later date. In lieu of flowers memorial donations may be made to Hospice of Holland, 270 Hoover Blvd, Holland, MI 49423.
Read Less

To send flowers to the family or plant a tree in memory of August "Gus" Knikelbine, please visit our Heartfelt Sympathies Store.

Receive notifications about information and event scheduling for August

We encourage you to share your most beloved memories of August here, so that the family and other loved ones can always see it. You can upload cherished photographs, or share your favorite stories, and can even comment on those shared by others.

Posted Jul 23, 2019 at 03:37pm
We are sadden to hear of Gus's passing. We often had Dan do work for us. Some of the times Dan would tell us he talked to Gus to see if there might be another way of doing the jobs. With our deepest sympathy to all of you and your family.
Bob & Jackie DeZwaan
Comment Share
Share via:
DF

Dave and Erica Baarman and family

Posted Jun 26, 2019 at 09:54am
We are so very sad to hear about Gus’ passing. We’ll miss seeing him wave at us and the kids from his tractor. He sure was a good man and awesome neighbor. Love to you and your family, Pat.
Comment Share
Share via:
BB

Posted Jun 25, 2019 at 02:31pm
Pat & Family, We are so very sorry to hear of Gus's passing. Always admired the smile on his face, no matter what he was going through.
Sending sympathy, comfort & love to all of you. Bruce & Barb

Posted Jun 22, 2019 at 07:49am
Our condolences to all of you. Gus was a great guy...we enjoyed knowing him through the years...What a beautiful tribute written about him...
Bob and Kym Zumbrink
Dickinson True Value Hardware
Comment Share
Share via: 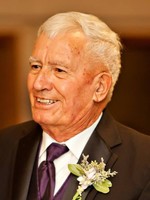