To share your memory on the wall of Verna Pitcher, sign in using one of the following options:

A memorial service will take place on Saturday, August 3, 2019 at Immanuel Reformed Church at 11:00 AM. Contributions in Verna’s memory may be made to Fennville Library, P.O. Box 1130, Fennville, MI 49408; or to the Multiple Myeloma Research Foundation, P.O. Box 414238, Boston, MA 02241-4238. Chappell Funeral Home is assisting the family with arrangements.
Read Less

We encourage you to share your most beloved memories of Verna here, so that the family and other loved ones can always see it. You can upload cherished photographs, or share your favorite stories, and can even comment on those shared by others.

Flowers were purchased for the family of Verna Pitcher. 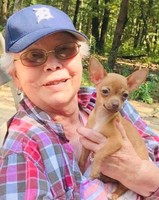