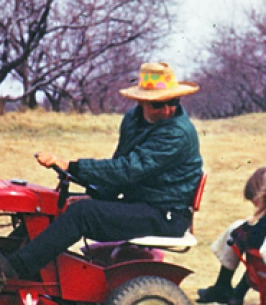 Share this tribute
Memorial Candles Lit for Roger | SEE ALL
Light a Candle
"We are honored to provide this Book of Memories to the family."
— Chappell Funeral Home
Funeral Details Memory Wall Photos & Videos Send Flowers

Print
Roger John Carlson, age 87, passed away at the Holland Hospital on August 24, 2018. He is the child of the late John and Dorothy Carlson. Roger was a proud member of the US Army, earning a bronze star in the Korean War. Roger was known for his kindness and willingness to lend a hand to anyone that needed it. He loved to spend time hunting, fishing, spending time in his vegetable garden, but he especially loved to spend time with his family on Hutchins Lake.

Roger is preceded in death by his wife of 59 years, Beverly Carlson. He is survived by his children, Richard Carlson and Terrie (John) Knikelbine; brother, Kenneth (Beth) Carlson; grandchildren, Regan and Jimilee; and great-grandchildren, Marquise, Darius, and Jaden. He is preceded in death by his grandson Joshua Knikelbine. Roger is also survived by his devoted friend Rose Onken.

A celebration of life will be held for Roger at the Fennville VFW on Saturday, September 22nd from 1-5 PM. Memorial donations in the honor of Roger can be made to the Fennville VFW, 2373 53rd St, Fennville, MI 49408 or The Alzheimer’s Association, 200 Turwill Ln, Suite 6, Kalamazoo, MI 49006. Chappell Funeral Home is assisting the family with arrangements, an online registry can be found at www.ChappellFuneralHome.com.

We encourage you to share any memorable photos or stories about Roger. All tributes placed on and purchased through this memorial website will remain on in perpetuity for future generations.

LM
My thoughts and prayers are with you now and in the days to come. I enjoyed Roger as a neighbor and friend. I will always remember his laugh, his whistling and his jokes. He would often ride by in his truck and catch me walking to share a joke. This great fun-loving guy will be missed.
Lynda Manthey - Saturday September 08, 2018 via Condolence Message

MS
Terri and Rick,
So sorry to hear of your Dad's passing. Roger, aka Uncle Roger to so many of us always had a smile on his face and something funny or uplifting to say. He lives on in our hearts. Thank you both for sharing him.

DS
Dear Terrie, Rick and family,
So very sorry to hear about your Dad....Your family were the best neigbors ever. I shall never forget your Dad singing us songs on the way to school! Your Dad and twinkle riding on the lawn mower and so many more wonderful memories! Please know that you all are in our hearts and prayers are with you. Devon
Devon Stuit - Wednesday August 29, 2018 via Condolence Message

MK
Rick, Terrie and all your families. So sorry to hear about Roger. He was a great guy, a close friend to our family and knowing Roger, a close friend to a lot of others. Always smiling and joking, yet quick to lend a hand if needed. He will be missed by many.
Mike and Kathy Kiss - Wednesday August 29, 2018 via Condolence Message

LG
Rick and Terrie,
Your dad was one of the friendliest men I knew. He had a quick, genuine smile and a great sense of humor. I enjoyed him coming to the farm when I was a kid. My condolences to you and your family.
Lois Felker Guidry - Wednesday August 29, 2018 via Condolence Message

JB
My condolences to the family. Roger gave me a job and chance when I was a young man and he took the time to help me get started and also was a good friend. Even thou that was many years ago I still remember him and he was a great man in my eyes always. R.I.P. Roger

MJ
Rick and Terrie, my deepest condolences on your dad's passing. You will be in my heart and prayers.
Mary
Mary Guigue Johnson - Monday August 27, 2018 via Condolence Message

TK
We were so sorry to hear of Roger's passing. He was one of the great ones and will be missed by many people. Whenever we saw him at the restaurant or garage he always had time for a little humor and always with a big smile. We are all so much better off for having had him in our lives.
Tom and Paula Kiss - Monday August 27, 2018 via Condolence Message

M
Rick and Terri and family,
Gary and I are so sorry to hear of your Dad’s passing. He was a good friend and always had a smile and time to chat. You are all in our prayers.
Gary and Mary
Mary McCracken - Monday August 27, 2018 via Condolence Message
1
Page 1 of 1
Share
×

Thank you for sharing!

Provide comfort for the family by sending flowers.

Or use your email:

Send flowers to the family
Choose from beautiful standing, table and basket arrangements. Safe and secure online ordering.
View Flower Arrangements
What has already been purchased for the family?
Plant a Tree in Memory of Your Loved One
An Honouring a Life memorial tree is a unique tribute which provides global benefits like no other memorial gift could.
Plant a Tree
Family Log-In

Connect with families at their time of loss. By subscribing to email updates, you will receive two daily updates containing all new stories, photos, candle lightings, condolences, and more.