Obituary for Anna May Onken (Anthonsen) 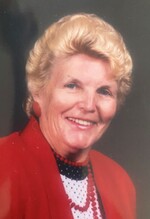 Anna May (Anthonsen) Onken, 84, of Fennville, MI passed away Wednesday, February 17, 2021 at Holland Hospital. Born May 26, 1936 in Chicago, IL, she was the daughter of the late Marius Royce and Anna Louise (Abrahamson) Anthonsen. On February 6, 1951, Anna May married Richard Allen Onken. Together they shared sixty-eight wonderful years of marriage prior to his death in 2019. She was a longtime member of Pearl United Methodist Church and had retired from the Michigan Fruit Cannery. Anna May loved to go to auctions and hunt for deals at garage sales. She and Richard enjoyed spending their winters in Florida for many years following their retirement. Mostly, Anna May dedicated her life to raising their children. She will be remembered fondly by her sons as the best mom ever.

Anna May is survived by her sons, Keith (Vicki) Onken, Jerry (Pat) Onken, Ken (Pam) Onken and Scott (Kendra) Onken. She is also survived by her sisters-in-law, Carole Vork and Phyllis (Larry) Babinski. Anna May was the proud grandmother to ten grandchildren and seventeen great-grandchildren. Along with her parents and her husband, she was preceded in death by her daughter, Connie Elaine Onken; and her brothers and sisters.

The family will receive friends at Fennville United Methodist Church on Monday, February 22, 2021 from 10:00 AM to 11:00 AM. A funeral service will begin at 11:00 AM officiated by Pastor Doug Tipken. Anna May will be laid to rest in Fennville Cemetery beside Richard following the funeral service at the church. Memorial contributions may be made to Pearl United Methodist Church, 5849 124th Avenue, Fennville, MI 49408. Chappell Funeral Home is assisting the family.